How to join RAW in India

if you are interested to be the part of The Research and Analysis Wing (RAW) is the foreign intelligence agency of India, check out this blog now. 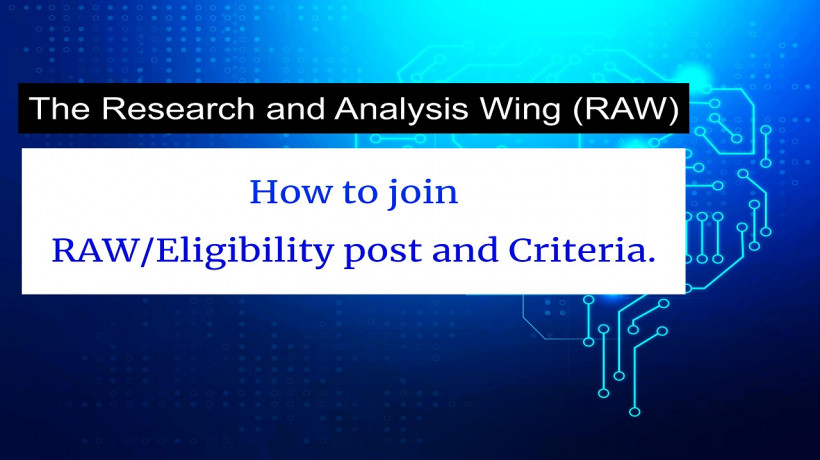 Objective and Functions of RAW

The Research and Analysis Wing (R & R&AW) are not exposed to the public. However, the foremost responsibility is to preserve the integrity of India and also to protect confidential information. Some other functions include:

Indian officials are dependent on the intelligence data gathered by RAW to influence international public opinion, revise foreign policy and shift national security policy. Some other responsibilities and roles of RAW are:

The eligibility criteria to become a RAW agent involve the educational qualification, age limit and experience of the applicant.

Aspirants have to graduate from a reputed organization to apply for an Intelligence Officer post. In case of RAW, candidates should have a good education from a reputed University. Along with that, learning one foreign language is necessary to become a RAW agent.

To apply for Intelligence Bureau jobs, the applicant must be under 56 years of age. 20 years of service is also required to become a RAW agent.

Other criteria include that the candidate must be a citizen of India. The candidate should not have any criminal background, and should not be a drug addict.

How to Get into RAW

It is tough to get recruited in the organization as the process includes a written examination followed by an interview. The Intelligence Bureau recruitment process needs the candidates to appear for CGPE (Combined Graduate Preliminary Exam) conducted by SSC (Staff Selection Commission).

To become a RAW agent, candidates have to take the ‘Group A’ Civil Services exam under the Central Staffing Scheme. They have to clear all the stages of the Civil Service examination and the qualified candidates are allowed to write the RAW test.

What does the Job of a RAW Agent Entail?

The job profile of a RAW agent includes monitoring the political and military developments in countries surrounding India. Some of the objectives are:

How to Join RAW- Job Profiles

Some of the job profiles for which RAW recruits include:

Before being selected as a RAW officer, the civil servants must complete a foundation course from Lal Bahadur Shastri National Academy of Administration. In the end, RAW conducts interviews where the candidates have to go through psychological tests and interviews. Shortlisted candidates start working at RAW for a period of one year.

A Career in RAW India – Training

In the necessary ten days of training, you are supposed to attend an introduction session in Delhi. You will be given an introduction to the basic terms of intelligence and how to deal with the real world. Apart from that, candidates will have to learn common techniques, information security, different languages and scientific knowledge. Moreover, you will also have to go through some case studies and solve some case studies of the intelligence agencies of Israeli MOSSAD, Australian ASIS, Russian KGB, Pakistani ISI, etc.

After completing the introductory training session, candidates have to go to the Indian military academy, Dehradun. The duration of the training period is one to two years. Here, you will be trained about real-life circumstances. They will also have to learn the following: